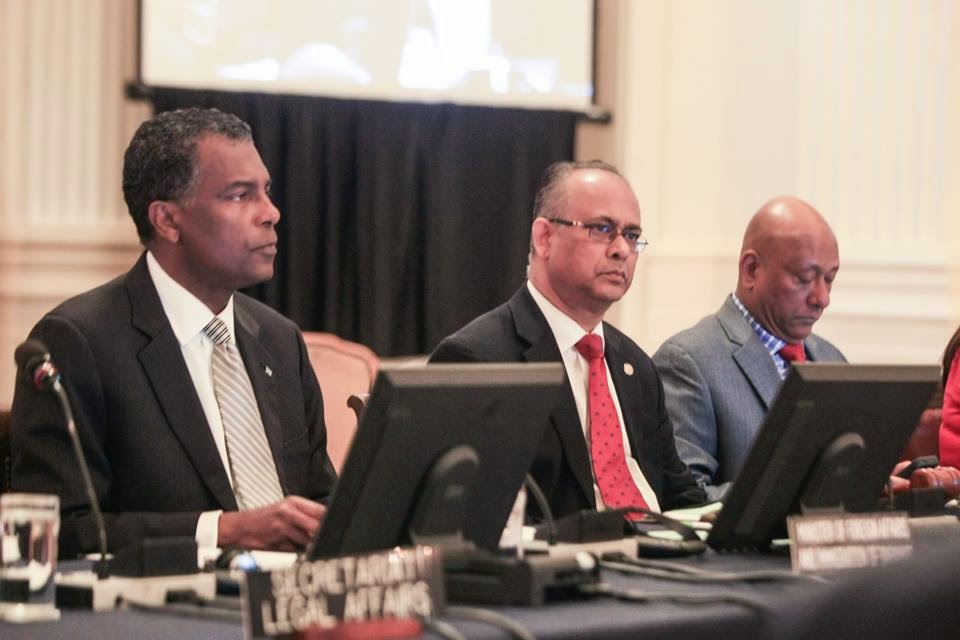 WASHINGTON, D.C. -- Foreign Affairs and Immigration Minister the Hon. Fred Mitchell totally discredited the malicious misinformation circulated nationally and internationally about The Bahamas’ new immigration policy during a major address at a Special Permanent Council Meeting of the Organization of American States (OAS) on Tuesday, December 16, 2016.


Addressing ambassadors from OAS-member countries and a number of guests assembled in the ornate Hall of the Americas in the OAS main building on 17th Street, N.W., Mr. Mitchell made direct reference to the misinformation being circulated about the new policy by Attorney Fred Smith, President of the Grand Bahama Human Rights Association.

“There are three allegations that have been made that bear addressing in this forum which go to the heart of the matter: our country’s reputation,” Mr. Mitchell said. “There is a Queen’s Counsel in The Bahamas who heads a human rights organization which is connected around the world and whose allegations have made headlines in the hemisphere and around the world. The specific charges must be refuted.”

Attorney Smith has recklessly accused the government of “institutional terrorism,” “ethnic cleansing,” and “running Auschwitz in The Bahamas,” referring to the Carmichael Road Detention Centre.

“The latter statement alleged in particular that this minister was responsible for Auschwitz in The Bahamas,” Mr. Mitchell said. “Madame Chair, words have meanings and when a Queen’s Counsel makes such a statement he must be put to proof. Certainly the government of The Bahamas is bound to respond. Let me be clear: there is no institutional terrorism, no ethnic cleansings, no Auschwitz in The Bahamas. No group is being targeted for elimination in The Bahamas, no mass murder is occurring in The Bahamas and certainly none which is sponsored or sanctioned by the state. There is no evidence anywhere that this is the case and we refute it absolutely. We once again repeat the invitation to the human rights bodies to inspect at any time and without notice.”

Mr. Mitchell emphasized that the United Nations Human Rights Commission has a representative in The Bahamas and “they have been to the detention centre and can say whether or not we are operating gas chambers and engaging in mass murder in the Carmichael Road Detention Centre.”

“The remarks are so outrageous and absolutely irresponsible and I condemn without reservation,” the Foreign Affairs and Immigration Minister emphatically stated.

Earlier in his address Mr. Mitchell said that on “behalf of Prime Minister Perry Christie, the government and Peoples of the Commonwealth of The Bahamas, I appear here today to deal with a serious matter: the reputation of The Bahamas.”

“Nothing is more important to us than that in the international arena, whether in the hemisphere or in the sub region or around the world,” Mr. Mitchell said. “Reputation is everything. The respect which we have around the world, depends upon our reputation. My nation of less than 400,000 souls thrives off its reputation. Tourism is our main business. People come to The Bahamas as tourists because they believe and perceive that it is better in The Bahamas, and it is.”

Noting that The Bahamas is paradise and “we work very hard to maintain that reputation,” Mr. Mitchell said thousands of business people and “non-Bahamian residents live in our country because it has a stellar reputation as a safe place for investment and wealth management: a well regulated, transparent jurisdiction.”

“What we know however is that we must be eternally vigilant in protecting our reputation: correcting untruths and misperceptions where they exist and of course ensuring that within our borders and in our external relations we so conduct ourselves that we to the extent that our resources permit adhere to the highest standards and best practices as set by the international community,” the Foreign Affairs Minister said. “I am here today to reaffirm our commitment to the principles of the rule of law, due process, the international treaties on migration and all the instruments to which we adhere in the Inter-American system. Please be assured of that.”

He added, “This assurance goes out to friend and foe alike and has become necessary because of the misinformation that has been circulated by two innocuous administrative measures that were announced by The Bahamas, which took effect on 1st November 2014. The policies were contained in a one page document which advised the public that work permit applications would not be accepted for those people who did not have legal status in The Bahamas without them first being certified as being seen by one of our consular officers in their home country or in the nearest office to their home country.

“The second was that all non-nationals who live in The Bahamas would have to get and hold the passport of their nationality and obtain a residency permit, which would be evidence that they have the right to live and work in The Bahamas.”

Mr. Mitchell said these policies should not have been a surprise to anyone, adding that the political party “to which I belong announced that we would be perusing immigration reforms prior to our election to office in 2012.”

Mr. Mitchell pointed out that on an official visit of the President of Haiti to The Bahamas on July 28, “we advised the Haitian government that we proposed to do so and sought their advice on whether they could meet the expected demand for passports at their embassy.”

“The President indicated that they could,” Mr. Mitchell said. “This was followed up with a similar exchange at the margins of the United Nations in September with the Foreign Minister of Haiti, my distinguished colleague. We have since spoken with the Minister in the margins of the summit in Havana Cuba last week and the Haitian government has indicated that they will take measures to meet the demand. I thank them.”

The Foreign Affairs and Immigration Minister stressed that the Department of Immigration, which is charged with the responsibility for executing the new policies, has an enforcement unit and each day, they go out and do immigration checks.

“The press both at home and abroad keep referring to these as round ups or raids,” Mitchell emphasized. “There are no round ups in The Bahamas. Round ups are for cattle not people. Words make a difference.”

On November 1, Mr. Mitchell added, they did what they usually do “and in the course of one of these checks, parents abandoned their children and left the children unaccompanied in their homes. This was later borne out by the parent in the press who indicated that he ran and told the children do not to open the door.”

“The constitution of our country empowers officers to arrest people who are committing offences on the following standard: a reasonable suspicion that an offence has been committed, is being committed or is about to be committed,” Mr. Mitchell said. “Officers are briefed on that standard and reminded of their responsibility in law to treat everyone with respect and with dignity and to afford everyone due process. So far as I am aware they have stuck to that standard. The government does not sanction any deviation from that standard.”

He said the International Human Rights Commission is invited along with the Organization for American States “to come at any time and inspect our procedures and facilities and see whether what we are saying is correct.”

“We are open and transparent and have absolutely nothing to hide,” he insisted. “Where there are shortfalls, we are committed to ensuring that those are corrected.”