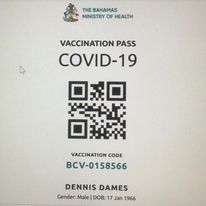 The potentially crippling and lethal Corona Virus is fluid, dynamic, deadly and dangerously potent – and it rages on in many quarters of the universe.  We hear about vaccines, and new variants of the disease regularly, and it appears that no one really knows how to control the contagious and rapidly mutating CoViD-19.

Politicians are doing their best to paint a promising picture for the people with their respective get-vaccinated campaigns.  It’s a noble initiative, but a vaccinated person can still catch CoViD – and possibly die of related complications.  The only difference is that the science says that a vaccinated person has a significantly less chance of hospitalization, and death if they catch CoViD19.

It’s a catch-22 situation.  We have to live and die with the contagion in a rebellious culture – where people ignore the standard protocols of social distancing, mask wearing, hand washing and sanitizing and so on; and they are intensely skeptical about the various vaccines.

I bit the bullet one day in May, and proceeded to get my first jab.  I was fortunate enough to be served without an appointment.  There was only an elderly couple before me, who were there for their second shot.

I am relieved that I had made the decision to get vaccinated in an atmosphere dominated by the good, bad and ugly reports of CoViD-19’s impact in our world, and the dreaded vaccines.  I advise my fellow Bahamian brothers and sisters who have not taken the first step yet to get vaccinated against CoViD19 – to bite the bullet and get on with it.

The losers of the next general election in The Bahamas

Who’s going to lose the next general election in our country – The Bahamas? We, the Bahamian people, as usual.
There is no political party out there that’s up to the challenge of moving our nation out of the grips of omnipresent poverty, widespread illiteracy, rampant crime, the pervasive underground economy, and economic stagnation.

The PLP and FNM have demonstrated over and over again in government – that they are simply executive taxers, borrowers and spenders. They only want to get control of the cookie jar once more, so that they can continue their regular lovers, family and friends feast – while many more of us join the unemployed and underemployed band, the hunger line, the default payment society, and the – may God help us prayer.

FNM and PLP leaders have shown us their wicked colours a long time ago, but we still look forward with great enthusiasm – to screwing ourselves all over again at the next polls. It’s like stupidity on steroids. We love punishment and the shit end of the stick; and the politicians are always delighted to swing us again – one more time.

I have noticed the misguided passions of the yobbish PLP and FNM fans – and cheerleaders on social media. We are stupidly blind and politically careless about our future. We don’t know Brave Davis yet, or Fred Mitchell, Glenys Hanna Martin, Obie Wilchcombe, Dr Hubert Minnis, Carl Bethel, Dion Foulkes, et al?

What could those political dead weights do for The Bahamas and Bahamian people at this juncture of our existence as a free nation and people? They grew up in the corrupt PLP and FNM. They have already executively served in the various corrupt PLP and FNM regimes over the past few decades, and all we got from their respective governments are more public debt, more crime, more unemployment, more hunger and suffering, a broken education system, a failing health care infrastructure, and an absolutely corrupt status quo.

So, who will lose the next general election in The Bahamas again? We, the Bahamian people will – if we don’t collectively resolve to hold the next Bahamian government’s feet to the fire – for the benefit of a truly better, prosperous and more competitive Bahamas and Bahamian people in the 21st century.
Posted by webcrat at 11:25 PM

WE ARE NOW IN A RACE OF VACCINES VERSUS VARIANTS

Covid-19: A RACE OF VACCINES VERSUS VARIANTS:

In 1978 Mr. Kemp started his career at the South Ocean Beach Hotel & Golf Club as a Ranger, cart attendant and golf starter.

In 1986, he needed a career change and joined the Royal Bahamas Police Force where he spent approximately eight years serving our Country.

In 1995 Mr. Kemp left The Bahamas.  As an avid golfer he received his Professional Tour Card in 1998 to play golf in the South American Tour, and took up residency in the United States of America to play professional golf.

While commuting between The Bahamas and Europe, Mr. Kemp pursued a business enterprise in 2008 by opening The Big Stick Restaurant and Bar in Adelaide Village.  He is interested in joining the political arena because of the current state of affairs in the country.

He believes that Bahamians are not only being taken advantage of, but are also disadvantaged due to existing Government policies, and our present political system.  As a concerned citizen of The Bahamas, Mr. Kemp brings a wealth of knowledge to the political process and is committed to bringing about change to our country.

He is keenly interested in advancing the welfare and wellbeing of Bahamians throughout the Commonwealth of The Bahamas; particularly those in the Golden Isles Constituency.

His hobbies include fishing, golfing and building.

He is the proud father of six children.

Samuel Alexander Kemp Sr.
INDEPENDENT CANDIDATE for GOLDEN ISLES CONSTITUENCY
"Representation without Taxation"
A Bahamian who believes in Bahamians 100%.
It is not the people’s time; it’s the Bahamians’ time - and they will not get what they want, but they will get what they need. 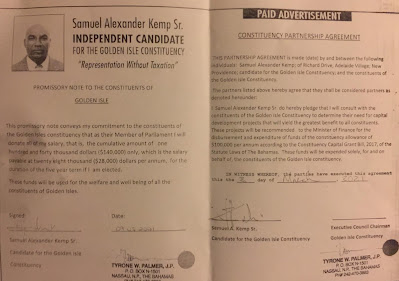 The Bahamas is ill-equipped to become a model republic state

Offshore oil exploration and drilling in The Bahamas - The politics, news, notes, perspectives and opinions...

Some Background Information on the Offshore Oil Exploration and Drilling Issue in The Bahamas.