WHY WE SHOULD COMMIT TO CENTRAL BANK DIGITAL CURRENCIES (CBDC) END PAPER MONEY AND CONVENTIONAL BANKING! 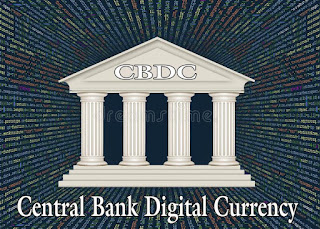 Central Bank Digital Currency (CBDC) model is the best of the iterations of money in the financial future; the urgency of which has now arrived.
Four years ago, on a programme called “Essentials”, hosted by Hubert Edwards, I and my colleague - Central Bank advisor Mike Mckenzie, Malaysia - argued this point.
Here is what I contributed: CBDCs are not a panacea, but their role is far more disruptive than it seems even their adherents are willing to admit. The goal should be the absolute elimination of paper money and banks as we know them.
1. It would disintermediate banking and banks as we know them completely
2. It would recalibrate a proper equilibrium between the money supply and goods and services; whilst facilitating efficient multi currency transactions and trade finance
3. Such a platform on bespoke Blockchain could initiate in-system peer-to-peer lending and direct digital utility payments, with more comprehensive, fair and accurate regulation
4. It would require completely new standards for identity and Constitutional protection of both biological and digital identity as a new definition of human personage
5. For states whose currencies are PEGGED to the US dollar, a CBDC would allow for more disciplined aggregation and management of US dollars, since they’d be exchanged upon entry into the country for the digitised currency.
There are some critical issues which require constant monitoring and transparency:
a. Any issuance of a CBDC that runs indirectly through the traditional banking system amounts to an illegal tax; since its purpose would be to stave off conventional banking collapse; this preserving a 200 year old obsolete system that enriches the few.
b. Any conventional bank now building brick-n’-mortar buildings is developing into a false future, the urgency of which is already present and enervating.
c. For the efficient deployment of CBDCs, there would have to be free, reliable broadband, protected by bespoke - multi-redundant - power supply.
CBDCs in their development has been largely naive, thinking that the technological achievement of the CBDC is the accomplishment.
This is false: such innovations must nest in a legal and Constitutional context. As such, CBDCs require proper foundations Constitutional alignment for the following reasons:
a. The Central Bank could collect both data and metadata that would reveal every purchase, amount of purchase, location of purchase, items purchased.
b. This is both unconstitutional and would undermine democracy by robbing the citizen and any consumer of his or her right to privacy.
c. The disclosure of identities would mean governments could target specific consumers and enterprises for political reasons.
These issues are not insurmountable. Estonia has largely solved these problems - as I show in papers written two years ago - and they have done so in a manner that maximises options for broad currency digitisation, whilst enhancing Constitutional protection.
There would be benefits to data collection scrubbed by smart data analytics of all features of identity, perhaps even location: this would generate real-time real-life performance based creditworthiness; eliminating the need for ex-post 20th century backward looking credit ratings.
Moreover, the non-identifying data would produce additional benefits at scale: they would reveal patterns and flow of consumerism, accurate breakdowns of goods and services divides, provide accurate forecasting of taxes, and because of the efficiencies gained in US dollar sequestration, the management of the reserves supporting the zero-value dollar-PEG would become transparent, precise, and the reserves should see an uptick in its baseline aggregates!
Source/Comment
Posted by webcrat at 7:06 PM