FROM THE BEGINNING OF MY CAREER AS AN ECONOMIST, I REJECTED THE DIVIDE BETWEEN GROWTH AND DEVELOPMENT AS BEING MEANINGFUL!

By Professor Gilbert Morris
As I wrote in my final Economics paper so long ago: ”All development includes growth or its prospects. But not all growth is development: and our concerns should be to foster development”. 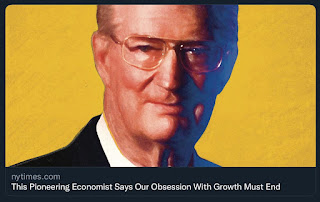 Now here is Herman Daly - an economist who pioneered development over growth, along with our own Sir Arthur Lewis, for different reasons - now making headlines at last for these concepts, toward which intelligence, commonsense and our needs should have directed us long ago against Western/IMF orthodoxy.
QUOTING DALY:
"Mainstream economists don’t have any answer to that to the growth redundancy. The reason they don’t have any answer to that is that they don’t measure costs. They only measure benefits. That’s what G.D.P. is."
"In ecological economics, we’ve tried to make a distinction between development and growth. When something grows, it gets bigger physically by accretion or assimilation of material. When something develops, it gets better in a qualitative sense."
"What I call the empty world was full of natural resources that had not been exploited. What I call the full world is now full of people that exploit those resources, and it is empty of the resources that have been depleted and the spaces that have been polluted."
"globalism versus internationalism. Globalism says to erase national boundaries. Let’s have one global system that we manage globally. Internationalism says national boundaries are important, but they’re not the ultimate thing…”.
"Earth is not expanding. We don’t get new materials, and we don’t export stuff to space. So you have a steady-state Earth, and if you don’t recognize that, well, there’s an education problem."
Source
Posted by webcrat at 11:44 PM