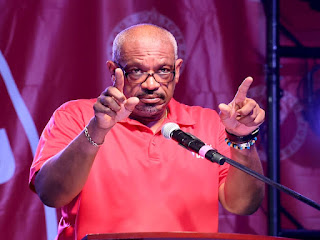 You have had your opportunity to lead The Bahamas and make an historic difference, but you have squandered it from day one.  It all started with your demagogic position on VAT – leading up to the 2017 general election.

Although you were right at the table in the last Hubert Ingraham FNM Administration – between 2007 and 2012 - where the implementation of VAT in The Bahamas was set in motion, and subsequently implemented by the Perry Christie PLP Regime of 2012-2017 at 7.5%, you played brand new and publicly opposed it.

Then after the FNM won the 2017 election, you became the Prime Minister and increased the VAT rate to where it is today – at 12%!  So, you unwittingly provided all the nails for your political coffin.

It was a hugely unforgiving political move, as the Bahamian electorate would let you know in overwhelming fashion in the 2021 election.  You did it to your own lying self Dr, and you will always be remembered publicly for it.

On top of your unbearable VAT increase, came Hurricane Dorian and the Corona.  All hell break loose after that.

And we, the poor people especially – were waiting patiently on your lying ass. You could of felt it - no doubt, so you knew what was coming down the pipe.

That’s why you jumped before you were pushed, and called an early election.  Good move bro.  You are now officially done!