Bahamians are Suffering in The Bahamas, Prime Minister Davis!

An Open Letter to Prime Minister Davis on Bahamian Suffering

The cost of running The Bahamas is placed entirely on the backs of those least able to afford it, the wage earners, the poorest of us. 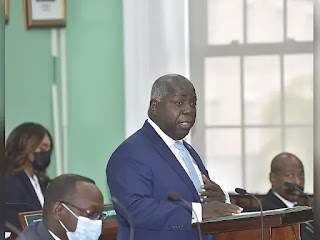 You have spent much time lately talking about inflation impacting the high cost of living here in The Bahamas.  It is striking to me that for the most part, you and the majority of your class are completely immune from the realities facing MOST Bahamians.

Most Bahamians do not have the luxuries you do.  Perhaps you have earned these luxuries.  Yet, I would argue that living paycheck to paycheck, uncertain of what tomorrow will bring economically, should not be the fate of most Bahamians in 2023, in a relatively rich country.

Yet, these are our realities, Mr. Davis, not yours.  So, how can you say you and your party truly “represent” us?  How can you say we are all in this together?

Even more important, is what you are not saying regarding the dire situation The Bahamas faces as a whole; in the collapse of our standard of living, rising crime, a 100% debt to GDP ratio, millions of dollars leaving our coffers on a daily basis to pay off loans which were taken out solely to cover up the corruption, theft, inefficiency and incompetency of our political class.

This is before we confront the very real and near term costs associated with climate change mitigation.  Let me be direct here, Mr. Davis, most of our social problems stem directly from the regressive and odious taxation policies here at home.

I am claiming that, above all else that is going on in the world, our own taxation scheme is what is causing the pain and suffering here in The Bahamas.  You have not mentioned this, as far as I know.

All this talk of Duty, VAT, NIB contributions, rising fuel and electricity costs, business licenses, of hiring people to go around as “price controllers”, is utter nonsense.  These are diversionary tactics to hide the real villain.

Trickle down economics, upon which the premise of our taxation scheme is predicated, has proven to be an utter intellectual fallacy.  This experiment has failed everywhere in the world.  Why do we still cling to this lie that if we don't tax the rich our economy will prosper and everyone will be better off?

The cost of running The Bahamas is placed entirely on the backs of those least able to afford it, the wage earners, the poorest of us.  Here in The Bahamas, we have taxation exactly backwards.  Rich people can come to the Disney World of the Caribbean, our Bahamas, and live virtually tax free.  No tax on their income.  No tax on their business gains, no real property tax, to speak of.  Is this fair?

All taxes placed on businesses, are passed along to the consumer, the poorest of us.  With this recent FTX scandal, what stood out to me was not the level of criminality involved.  What really struck me was how willing we were to take Sam Bankman Fried's ill-gotten money and use it for frivolous political contributions, sports stadiums, high end real estate, yet not use a penny of it to ease the burdens of most Bahamians.

Before a Bahamian wage earner's money is touched by the Bahamian government, we need to agree upon and implement a fair, reasonable and Christian way of taxing our people.  A progressive income tax is one way.  Taxing those best able to pay.

Arguing against this is can only work with those uneducated and ignorant of fiscal and Christian thinking.  Regressive taxation, as we have here, is in the same category as defending marital rape.

I maintain that it is not just poor household decisions which are at the root of these ills, rather they are a direct result of our unchristian, and unfair taxation of our people, by the political ruling class.  Until you are honest Mr. Davis, about the true causes of human suffering here in The Bahamas, you will only be a politician, never a leader.

A true leader of the people would wish for the best possible outcome for all of us, and speak the truth.  A true leader would not support policies that benefit a select few, as you do now, who get richer by the day.

If we are all truly in this together, the present status quo is unacceptable. Period.  You do not have to be a PhD. in economics to see what is going on here.

That you do not have in your administration, even one bold, moral and intellectually honest member willing to speak to this matter, says wonders.  From my perspective, neither the PLP or the FNM, nor any other fringe party, has any hope of leading our country into the future.

For all the talk of Christianity in this country, I find it absolutely incredible that we continue, in a methodical and calculating way, to place such unchristian burdens on the backs of those the bible refers to as, the least of us.  We are not behaving as a Christian country.

Let's quit pretending, and claiming that we are a Christian nation, until we get our odious taxation system in line with Christian values.  Mr. Davis, the Bahamian people are only asking for fairness and decency.

For too long we have accepted the short end of the stick, all for the benefit of the well-to-do and rich class, whom we refuse to tax adequately and fairly.  Until we make this substantial change of how we raise taxes to run this country, and pay our politicians, I can see no progress in our country that benefits the majority of the Bahamian people.  Until we fix our broken tax scheme, our social and fiscal ills will continue to get worse.